As the capital city of Indonesia, Jakarta is also the 13th largest city in the world. Moreover, in 2016, the total population exceeds 10 million people (plus 2,43 million commuters from surrounding satellite cities) with a growth rate of 1,07%.

With such a huge population, the waste volume in Jakarta is also high. In 2018, it is estimated that around 7.000 tons of waste were collected and disposed of at Bantar Gebang from Jakarta alone, every day.

In addition, around 250 tons of waste that were brought to Bantar Gebang originated from the rivers in Jakarta.

If things keep on going like this, the Bantar Gebang landfill is predicted to be able to operate only until 2021 (which is less than a month from now). Obviously, something must be done, fundamentally and immediately, starting from organic waste.

Black Soldier Flies: What and Why?

Black Soldier Fly, shortened as BSF, is a type of fly that has the ability to decompose organic waste by conversing it into environmentally-friendly material (bio recycle).

Black Soldier Flies eat organic waste during the maggot phase, and it likes any kind of wet organic waste. The life cycle of BSF is around 40 days, from eggs to fly, and 65-80% of the organic waste can be reduced within two weeks.

Besides processing organic waste, BSF larvae can also be utilized as animal feed. In fact, BSF larvae are high in protein and cheaper than fish flour.

The program started on 7th October and lasts for two weeks, up until 21st October 2020. The reason why the BSF training program was held in the first place was due to the waste management problems in both waste management sites, especially in handling organic waste.

Based on existing data and further consultation with the Jakarta Environmental Agency (DLH), the BSF training program is deemed as the most sustainable solution due to several reasons:

There are a total of 4 people as the beneficiaries of the training program, 2 in each waste management site.

TPS Kamboja is a community-run waste management site. The BSF training program in TPS Kamboja kind of introduces the BSF method as the site has not used BSF before.

This site received around 2 tons of organic waste and 900 kilograms of inorganic waste every day, and they also collect vegetables and fruit scraps from the nearby traditional market.

TPS Pesanggrahan is a waste management site that is under the jurisdiction of the Environmental Agency (DLH). The BSF Training Program serves to optimize the existing BSF practice that still needs improvement.

Pesanggrahan receives approximately 700 kilograms – 1 ton of waste daily, whereas the waste management capacity is only around 200 to 300 kilograms per day.

Training Program Results in Each Site

In TPS Kamboja, the waste management site has started to manage organic waste using BSF. However, the daily waste management capacity cannot be determined yet since the whole process itself is not yet settled.

Even though the beneficiaries were only two people, they had the initiative to teach the knowledge they acquired to other committee members.

Last but not least, TPS Kamboja has harvested the BSF maggot twice, the first one yielded 6 kilograms of maggot, and the second one yield 4,5 kilograms. Some of the maggots were even sold to a bird store to be used as bird feed.

In TPS Pesanggrahan, since they already used the BSF method, the results of the training program were the improvement of their methods, some of which they adapt from Waste4Change’s practice at our Composting Facility to make it tidier and cleaner.

Similar to the one in TPS Kamboja, the training that was given to the committee in TPS Pesanggrahan enable them to teach many more people regarding BSF cultivation. Moreover, the maggots that were yielded are of better quality than before.

Besides the training itself, the BSF program also includes a 6-month monitoring period in the following months after the training was held in order to measure and observe the progress and development of the beneficiaries after they were given the training.

The BSF Training Program is an example of the various types of community development programs that Waste4Change has established with one of our clients, as a part of their Corporate Social Responsibility.

Waste4Change can help design and execute CSR programs relating to waste management issues according to your company’s condition and needs.

Also, Waste4Change is open to any kind of cooperation or assistance for companies/individuals/communities who are interested to start managing their organic waste using Black Soldier Flies. You can also join our BSF Training Program at our BSF Learning Center in Sidoarjo. 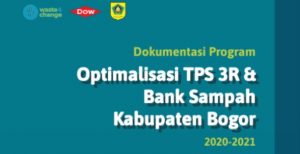 The Documentation of the Optimization Program of Bogor Regency TPS 3R and Waste Bank from the Year of 2020 – 2021 is a digital guide book published in collaboration with Waste4Change, Dow Indonesia, and the Bogor Regency Environmental Service Agency

6 Years of Waste4Change: Check Out Our New Services and Products for Responsible Waste Management Solutions

This year, Waste4Change is turning six! Check out our newest products & services for your responsible waste management solutions. Cheers to many more years! 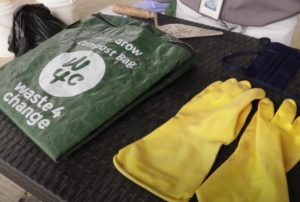