Boracay is a small island in Central Philippines located in Aklan province. Its white sandy beaches and blue water makes Boracay nominated as the world’s best island by Travel+Leisure magazine in 2012. Moreover, TripAdvisor also named Boracay as one out of the 25 most beautiful islands in the world, and 7th most beautiful in Asia.

Unfortunately, in April 2018, Philippines’s President Rodrigo Duterte ordered the closure of Boracay for tourists. This closure is not without a reason: a video showing black-colored sewage pouring straight into the water of Boracay went viral, and it caused the central government to take several measures including making the island temporarily off-limits for tourists.

Problem that Happen in Boracay Island

Pollution became one of the main problems in Boracay island. Mainly caused by the lack of proper sewage and waste management system. This is also worsened by the existence of many hotels and inns that operate on Boracay island.

Moreover, in some of the beaches, faecal coliform bacteria (e. colli that can cause diarrhea) were found in the water with an amount that is 47 times higher than the tolerable level.  This is certainly problematic as it poses health issues for both the tourists and the local people.

Boracay is not only famous for its white beaches but also its snorkeling sites and diverse marine life. Tourists can find pufferfish, clownfish, parrotfish, and even starfish. It will be such a shame if Boracay’s underwater beauty was to be polluted by untreated waste that resulted from tourism activities.

The number of tourists that visited the Philippines has increased significantly in the past several years. In 2017 alone, the number of international tourists who went to the country is as many as 6,6 million people. One-third of them, around 2 million people, visited Boracay.

To give you some perspective, Boracay island is only 10 kilometers square and is inhabited by 30,000 residents. With those figures in mind, the ratio of the tourists and the local people living there is 1 in 66 people.

Further investigation revealed that there are around 800 environmental violations that occurred on Boracay island. In addition, Philippines’ Department of Natural Resources and Environment (DNRE) has also ordered the shutdown of 300 businesses that have violated the laws.

And let’s talk about the amount of waste that is generated on the island. It is estimated that the waste produced by every person in Boracay is three times higher compared to the Capital City Manila.

The Importance of Sustainable Tourism

The negative impacts of humans’ existence and activities in tourism sites should make us re-evaluate existing tourism practices that we have been doing all these times. If not, then just like Boracay island, natural tourism sites that were once stunning and breath-taking will eventually be ruined and polluted.

The fact is, the tourism sector contributes to 5% of the global carbon emission, 4% comes from transportation, and the rest 1% results from the accommodation sector, while a small amount related to other tourism activities (UNWTO/UNEP, Climate change and tourism, 2008).

Furthermore, a tourist uses from 84 up to 2,000 liters of water per day, depending on the length of stay, size and amenities in the hotel, type as well as the amount of food consumed, and other factors. (Gössling et al., 2012)

The good news is, recently the concept of sustainable tourism is on the rise and has even be implemented in several places.

What is Sustainable Tourism?

The World Tourism Organization (WTO) define sustainable tourism as “tourism that takes full account of its current and future economic, social and environmental impacts, addressing the needs of visitors, the industry, the environment, and host communities”

Consequently, the principles of sustainable tourism are as follow:

Implementing sustainable tourism is also important because several studies have shown a growing demand for sustainable practices in the tourism sector from the consumers’ side.

To illustrate, a 2015 study by Booking.com revealed that 52% of travelers are more likely to choose a travel destination based on its environmental impact. Similarly, they are also three times as likely to plan to stay in more ‘green’ accommodations in 2015 than they did in 2014

What Are the Things that Need to be Taken into Account in Planning a Sustainable Tourism?

The mission to realize sustainable tourism will give positive impacts not only in the present time but also in the long run. Therefore, there needs to be a clear parameter in order to measure the progress of specific tourism sites to be more sustainable.

This is where benchmarking comes in. Benchmarking is “the comparison of a business’s performance in a given area (such as water consumption) with those of a similar business (Making Tourism More Sustainable – A Guide for Policy Makers, UNEP and UNWTO, 2005).

Benchmarking will help businesses to formulate and measure their progress (and even drawbacks) because they have a comparison that they can use as a guide.

Furthermore, the benchmarks that are usually used in tourism sector are as follow:

Implementing sustainable tourism cannot be done by just one or two actors. Instead, it should be done collectively and in harmony with every other actor that are involved in the tourism sectors such as:

1) Government. The government should implement regulations and policies that support the implementation of sustainable tourism, not only policies that are revolved around economic growth without taking into consideration the environmental constraints.

2) Consumers. As the one who enjoys and use the facilities that are provided in tourism sites, consumers should be given proper education on making responsible tourism choices. At the very least travelers should be aware of the negative impacts that they left behind in order for them to make better and informed decisions for future travel.

3) Local Communities. Communities who inhabit tourism sites should be involved in the decision-making process that revolved around their home as tourism sites. They should be asked whether they agree or disagree that their home is turned into a tourist destination, and if they do agree, they should also be asked how should the place be run or managed.

4) Tourism Industry. Business owners who are involved in the tourism sector should also be made accountable when performing their businesses. Such conformity can take various forms such as compliance with tax and local regulations. In other words, the existence of local businesses should improve the livelihood of local communities as well as educate the consumers in regard to sustainable business practices.

5) Non-government Organization. NGOs have important roles as a neutral entity to supervise and report practices that violate the law, whether in social or environmental aspects.

Indonesia has a lot of beautiful travel destinations, and the tourism sector itself is an important source of income for the country. Even so, some of the tourism sites have also experienced overcrowded due to the huge amount of tourists pouring in all throughout the year, namely in Bali.

In 2017, Bali was visited by 5,7 million tourists who are mostly from China and Australia. In addition, Bali Environmental Agency stated that there are as many as3,500 tons of waste that are generated in Bali every single day.

Bali is also experiencing some water crisis during the dry season. This is again due to the tourism sector that uses up to 65% of the island’s groundwater. Some studies have also found that infrastructures like hotels and villas consumed around 3,000 liters of water a day.

In Indonesia itself, sustainable tourism practices are still very few and rare, especially in popular and mainstream tourism sites. However, there exist several initiatives and practices done by communities to safeguard tourism sites and prevent it from being spoiled even more.

One example is the Eco Ranger project in Pantai Merah Banyuwangi, which resulted from the cooperation between Greeneration Foundation and Coca Cola Indonesia.

Eco Ranger is a community that consists of local people who run a responsible waste management system, educate both tourists and local residents regarding environmental issues, and ensure that the travel destination that is also their home can still be enjoyed by many generations to come.

As a social entrepreneur in responsible waste management, Waste4Change supports the implementation of more responsible and sustainable tourism practices through a service called Community-Based Implementation (CBI).

The massive amount of waste almost always becomes one of the main problems in popular tourism sites, and Waste4Change is ready to give assistant to the local communities in managing the waste that is produced in a responsible manner.

Because responsible tourism should not put the environment at stake. 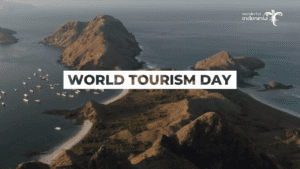 World Tourism Day 2022 will be held in Bali, Indonesia with the “Rethinking Tourism” is needed to implement sustainable tourism 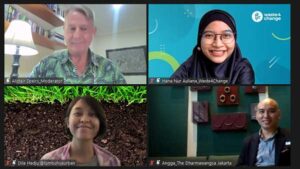