Sky lanterns are usually called Chinese lanterns/wish lanterns/flying lanterns, and these lanterns can be traced thousands of years back in both Chinese and Thai celebrations and festivals.

Even so, lanterns are also becoming a popular custom for many celebrations worldwide – weddings, birthdays, music concerts, national holidays, etc.

Lanterns are generally made from paper supported by a wire or bamboo frame with a holder at the bottom for the heat source.

Why Are Sky Lanterns and Balloons Dangerous?

To start with, the flight route and destination of both balloons and sky lanterns are not ours to decide, so they can end up literally anywhere – on lands, into the river, on the shore, or straight to the ocean. And that’s just the beginning of the problems.

Sky lanterns can fly up to 3,000 feet and lasts for around 6 to 20 minutes, or when the flame burns out. However, there is no guarantee that the fire will be completely out and cooled when the lanterns eventually land. Consequently, any contact with a flammable surface could start a fire.

Sky lanterns have caused serious fire incidents in the past. To name a few, the large blaze at Smethwick plastic recycling plant in 2013 was caused by a Chinese lantern that landed on the depot. The fire took 200 firefighters and 3 days to be taken out.

In the same year, the release of a single sky lantern in Washington resulted in 500-acre wildlife, which took 100 firefighters to extinguish the flames.

To top it off, at the start of 2020, dozens of animals were killed at a zoo in the western German city of Krefeld due to a fire caused by Chinese sky lanterns that were set off for the New year’s Eve celebrations.

According to Vietnam’s Ministry of Agriculture and Rural Development, almost 20 forest fires have been caused by burning sky lanterns since the beginning of 2010. In Hanoi alone, there have been 8 fires in workshops, electrical stations, and house that was caused by sky lanterns.

Dangerous for Wildlife and the Environment

When balloons and sky lanterns land on the ground (or even bodies of water), they pose a risk to livestock, wildlife, and domestic animals.

The first danger is regarding ingestion. There are many cases in which animals have mistaken lanterns parts for food and accidentally digested them.

The thing about sky lanterns is that they have a wire/bamboo frame, which takes ages to break down. If those wires get wrapped up in hay bales it would be like swallowing razor blades for the poor animals who ingested it, which can damage their throat, stomach, and intestines, leading to immense pain and eventual death.

The second concern is the danger of entanglement or entrapment. Besides the risk of digesting wireframes, there are also examples of farm animals getting caught in wireframes. The effects on wildlife might be less documented compared to farm animals, but they’re also at risk nonetheless.

The same goes for balloons. They can end up anywhere and might be mistaken for food by wildlife, especially birds, turtles, fish, and livestock. They also pose the danger of entanglement due to their ribbons and strings.

One tragic example is how a calf died after choking on a balloon that landed at Frimingham Farm at Detling. The owner, Paul Burden, discovered the calf’s body when he went to check on his animals. The blue balloon that killed the calf was one out of half a dozen balloons that landed on his farm.

To further illustrate the problem, more than a hundred balloons were collected at Edwin W. Forsythe National Wildlife Refuge in New Jersey, and that number is just a fraction of the discarded balloons waste that end up in the environment.

Due to the risks they pose, some countries and regions have banned the use of sky lanterns. In Thailand for example, local authorities have restricted the sale of lanterns ahead of major festivals.

Moreover, three German states have banned the sale of lanterns following the death of a 10-year-old boy in a house fire caused by sky lanterns in North Rhine-Westphalia.

Now that we’ve seen how devastating sky lanterns and balloons can be, what should we use instead to liven up the celebrations? Below are some alternatives that are more environmentally-friendly:

Sky lanterns and balloons are only one aspect of the many many elements of celebrations and parties that we need to carefully consider so that the way we celebrate things does not have to cost the environment or wildlife.

Think about the waste, the electricity, the resources, and the aftermath of the celebrations that you are going to hold. 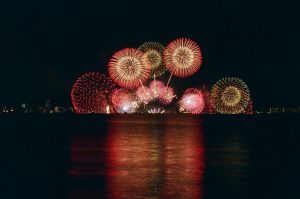 Fireworks: Pretty for The Eyes, Bad for the Environment

As pretty as fireworks can be, they are not that harmless. The aftermath of fireworks is often marked by the traces of pollutants it left behind