When it comes to balanced and healthy lifestyle, the Swedish people and their way of life is worth your attention. One of Swedish trends that started back in 2016 and is recently gaining popularity is called plogging, and for a good reason.

The term “plogging” is coined from the English phrase “jogging” and “plocka upp”, a Swedish term that means “picking up”. Yep, plogging is the Swedish fitness trend that combines jogging while picking up trash.

Besides plogging itself, there are also other variations of activity derived from it, such as  “taking a palk” (plogging walk) or a “pike” (plogging hike). It really does not matter whether you took a 2-mile jog or a 5-mile marathon, or just a 15-minute morning walk, the idea is that you do some physical exercise while helping to pick up litter!

You can run alone, or in groups, or while walking your dog, or even on your way to getting your coffee. You can do it early in the morning, or a bit before going to work, or even in the late afternoon. Anything that suits you!

Swedish native Erik Ahlström, who created the website www.plogga.se, says that all you need for plogging is a pair of gloves and a recyclable bag.

Felix Hamilton lives in London and Sweden and runs the Instagram @goplogging and the website www.globalplogging.com with his brother Hugo.

He compared people’s awareness regarding litter in both Stockholm and London, that while joggers and even people who were strolling around in Sweden picked up litter, in London the situation was the opposite.

Felix is then determined to go beyond motivating the local community and turn it into a global movement instead. As a starter, he went to Vero Beach in Florida, USA to do plogging.

“For people who jog regularly it’s great to introduce a bit of variety into your sessions. This looks like a good way of doing something different, which benefits the community. Quite a few joggers already take it on themselves to pick up litter when they see it in their running spots. Having a whole group of joggers doing this regularly could make a real difference to parks, paths, and pavements,”

And then there’s also one from India, where a man named Ripu Daman Bevli started picking up litter during his morning run and shared activity on his Facebook group, My City = My Responsibility.

His doing attract other runners, cyclists, walkers, and joggers across India and ultimately they formed Ploggers of India, where ‘cleaning up other people’s litter the coolest thing to do’. Until now, Bevli has organized over 500 clean up drives across India.

So, do you still need a reason to do plogging? Don’t worry, we’ll give you four reasons according to plogga.se as to why plogging is good for both you and the planet:

According to the Karolinska Institutet, the risk of depression, obesity, and cancer among people who are seated a lot and are physically inactive doubles for both adults and children.

There’s no doubt that moving your body will do great things for your health, and plogging will also add some extra moves like squatting or bending your body.

The litter that nobody bothers to pick up will eventually end up somewhere where it doesn’t belong, like in rivers and even oceans. Start plogging to prevent the litters from ending up in the oceans and killing our marine life.

When we littered the environment, wildlife will suffer, like how turtles, other marine mammals are entangled in plastic bags or plastic cutlery.

In fact, not only marine mammals but also seabirds might get trapped by our plastic waste.

In 2015, the costs of cleaning public spaces from litter decreased by SEK 2 billion in Sweden. Imagine how that money could be used to address more urgent issues. Collective efforts like plogging that help keep public spaces clean indirectly save the city’s cost.

Tips to Get Started and Get Plogging

World Cleanup Day 2020 is just 12 days away! Why not try your first plogging on WCD 2020? Amidst the pandemic, WCD 2020 will held a digital cleanup instead. However, you can still do plogging on your own, either individually or in groups of 2 or 3

Do not forget to obey the safety protocols and keep your distance while being outside. Happy plogging! 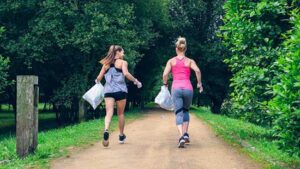