Based on KLHK (Ministry of Environment and Forestry) data, 60% of landfill waste is organic waste. In Indonesia, each person can produce 1.3 million tons of food waste per year. Similarly, according to data reported by ayobandung.com, 50% of waste is food waste.

Moreover, the Economic Intelligence Unit (EIU) 2016 report, stated that Indonesia was second in place as the country with the most wasted food in the world after Saudi Arabia.

The fact that Indonesia produces so much organic waste is a problem in and of itself because those organic waste can produce methane gas, which will cause the greenhouse effect and may explode.

In fact, research from Princeton University says that methane gas (CH4) is 30 times more dangerous than carbon dioxide (CO2) gas in terms of global warming. Then what’s the solution?

The Solution to Reducing Organic Waste

The solution to reducing organic waste from entering the landfill should start from ourselves, some of them include shopping for food adequately so that none will go to waste, this can be helped by making a list of what ingredients that should be purchased.

In addition, food waste can also be reduced by raising Black Soldier Flies (BSF) which can convert food waste into high-value fertilizer.

The composting process is carried out by various types of organisms, starting from bacteria, fungi, actinomycetes and many others.

In addition to these various microbes, it turns out that the process also involves bigger animals such as earthworms and various other animals that work together with microbes in the decomposition process.

Before starting the composting process, there are a number of things that you need to know so that the process and results of composting become better and more efficient.

Material and Type of Composter

In making compost, there are four components that are needed, which are: Carbon (brown waste), Nitrogen (green waste), Water, and Oxygen. The ratio of brown waste and green waste is 3: 1 in order to produce a good compost.

If brown waste is separated from green waste, the composting process will take much longer because the types of waste that will become dry and the microbes produced are very few and ineffective.

Organic waste is often called wet waste, but in fact not all wet waste can be used as compost. The following materials are some of the things that can and cannot be composted.

Ingredients that should not be added to compost such as meat, fat, milk, and cheese can hinder the decomposition reaction inside the composter. In addition, these materials will attract animals such as flies, which will cause maggots to appear in the composting process.

Alternatively, this material can be put into a biopore hole. As for the dog and cat feces, there are concerns that it might pollute the compost and even cause a disease.

After knowing the types of waste that can be composted, start making your own compost by piling up the green and brown waste by turns, for example, start by putting the brown waste first, and then the green waste, and covered it with brown waste again, and so on. Just like making sandwich.

As for handling the waste that cannot be composted, start by reducing it from the source, like finishing our food to prevent any leftovers. For chicken or fish bone, one can give it to animals, such as cats, dogs, catfish, etc., if there are no animals around the house, bones or other organic waste can be buried in the ground.

Another way to help reduce organic waste that cannot be added into the composters is by using the help of BSF maggot. Typically, BSF maggot will process organic waste in the form of meat into fertilizer.

After getting to know the types of organic waste as well as what can and cannot be added into the composter, there are also requirements or recommendations that must be known and carried out during the composting process.

Accelerating the decomposition process can be done by chopping up the ingredients that will be turned into compost, adding some water, and ensuring appropriate aeration (oxygen) by flipping through the mixture of these materials. Worms and fungi will further destroy these ingredients.

During the composting process, it is not recommended to give too much water, because water will fill the entire space so that the possibility of anaerobes is very large. If so, compost will produce an unpleasant odor.

Several other factors that can also influence the composting process in addition to the four things above include:

In the composting process, compost is said to be ready when the color turns black and there is no odor of garbage, the process takes about 4-6 weeks.

Good compost does not give off a pungent aroma, but it emits a weak odor such as the smell of soil or the smell of forest humus and if held and clenched, compost will clot. If pressed softly, the compost would will be crushed easily.

Problems and Treatment When Composting

Composting is sometimes labeled as “tricky and difficult”, in a sense that the composting process will most likely face several problems. Here are some common problems or obstacles that often occur when making compost and how to handle it.

If you are interested and want to try composting at home, Waste4Change provides composting equipment for those of you who want to help in optimizing organic waste management by processing it into compost.

Waste4Change compost equipment can help you produce compost aerobically (with the help of oxygen) using Composting Bag Waste4Change. Or you can start by using Black Soldier Flies (BSF) if you have a wider area.

You can also learn to optimize the results of the composting process using BSF by enrolling in training at the BSF Learning Center.

You will get 2 composting bags and 2 packs of compost. From each compost bag, you will get an efficient composting guide. Compost Bag can be used for more than 5 years, but it depends on how it is used.

The size of the composting bag is 38 x 70 cm high and it is produced with UV resistant material. Further instructions for using compost bag can be seen in: http://w4c.id/brosurCB 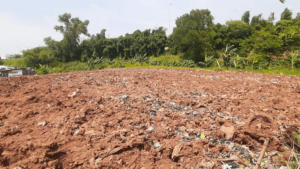 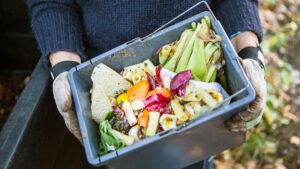 Major Causes of Food Loss and Waste with its Impact

Food loss and waste is a problem that cannot be solved without quick action. If this continues to be taken for granted, it ends up create impact