Since 3rd January 2020, a collaboration between Greeneration Foundation, Waste4Change, and River Recycle to combat waste in Citarum river has officially started. The program lasts for 3 years and will hopefully catalyze more initiatives to clean and keep the river clean

Benioff Ocean Initiative is based at the University of California, Santa Barbara, and works to leverage science to solve ocean problems and inspire the replication of these successes.

With the existing global crisis regarding marine debris and plastic pollution, the Benioff Ocean Initiative realizes that the solution can start by cleaning up the waste in the rivers before it reaches the ocean.

Hence, the Benioff Ocean Initiative (which will be shortened as BOI onward) cooperates with The Coca Cola Foundation to provide grants to empower programs and/or collaboration in tackling the flow of plastic waste from rivers to the ocean.

Recipients of the funding were then selected through a competitive request for proposals process for a period of 3 months, that is from May to July 2019. The output is no less than 9 river cleanup projects, creating a global network of organizations working collaboratively to eliminate river plastic waste.

The global network was then called The Clean Current Coalition, which consists of 9 teams, and each is made up of several interdisciplinary partners under the leadership of one organization committed to protecting the environment from plastic waste.

Those teams are namely Marea Verde who will lead the effort to clean Matias Hernandez River in Panama, Greneeration Foundation as the project lead for the Citarum River cleanup in Indonesia, Smart Villages and Chemolex who will install 10 plastic capture devices in locations along the Nairobi River in Kenya, Wildcoast who will work in Los Laureles Canyon, Mexico, Ichthion with their Azure system in Portoviejo River, Ecuador, Ocean Conservancy who will be focusing on Song Hong River in Vietnam, as well as Terracycle Global Foundation who will be capturing plastics at the Lat Phrao Canal in Thailand.

The project that is led by Greeneration Foundation is an effort to capture waste and clean the Citarum river for the general public without any charge any fee whatsoever.  Instead, the project will be funded using the grant from both BOI dan The Coca Cola Foundation (TCCF).

The Ultimate Goal of the Benioff Ocean Initiative Projects

Even though the efforts to capture plastic waste from rivers are indeed strategic and worth-doing,  at the end of the day it only serves as a short-term solution that should no longer need to be carried out in the future.

In another word, the plastic waste intervention program is deemed as successful only if the collected data can be leveraged to influence decision making and the public’s perception towards this issue.

It is important to note that the final desired results do not only stop at a clean river, but rather at advocating the existence of public policies regarding the production and use of plastic, the making of infrastructures to increase the capacity to manage plastic waste so that it does not end up in rivers, minimizing the use of plastic products, and if possible reducing the production of plastic itself.

With such significant changes, then it is hoped that the root of plastic pollution problems can be addressed properly. The solution that we should be looking for is not merely how to clean up our rivers and oceans, but more importantly how to keep our rivers, and eventually our oceans, clean and free from plastic. 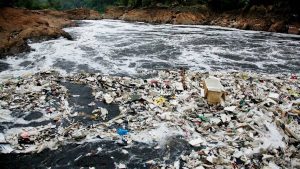 Get To Know: How Waste Can Affect Forests and Water Sources

Leaving aside big cities and residential areas, surprisingly, forest areas and water sources are also affected by the increasing number of waste Why We Need Reformation of Plastic Waste Management in Indonesia

The World Bank estimated that Indonesian just pay about the half of standard cost on waste management, which makes waste often collected and treated inappropriately.